Measuring Gases in the Atmosphere at Trace Levels

Long-path differential optical absorbance spectroscopy (LP-DOAS) is an optical technique that provides simultaneous trace-level measurements of multiple gas species in the atmosphere. The Beer-Lambert law describes the relationship between a measured optical spectrum and an emitted spectrum, based on the absorbance cross section of each gas in the optical path, the concentration of each gas, and extinction factors related to light scattering. LP-DOAS applies this law to measure a variety of gases, down to trace-level concentrations.

LP-DOAS has been used in various applications, including the study of urban pollution, remote sensing of volcanic emissions, and investigation of atmospheric halogen chemistry.[1] Major metropolitan areas are experiencing an increase in ozone (O3) pollution. Ozone is responsible for oxidation of atmospheric constituents, resulting in secondary pollutants.[2] According to data collected in Shanghai, the level of O3 is also closely related to the concentration of NO2.[2] Nitrogen dioxide (NO2) is a pollutant released by internal combustion engines and many industrial processes. Exposure to NO2 can result in respiratory issues and irritate the eyes and skin. For these reasons, NO2 is an important species to monitor in urban settings.

In addition to NO2, LP-DOAS can deliver low detection-levels, measured in nanomole-per-mole to picomole-per-mole ranges, for other gases that absorb in the ultraviolet to near-infrared wavelength range, between 270nm – 800nm. Detectable species include: NO2, NO3, HONO, O3, SO2, CIO, OCIO, BrO, IO, OBrO, OIO, I2, OIO, formaldehyde, glyoxal and oxygen dimer O4.[1]

A typical LP-DOAS optical system includes a broadband light source, covering wavelengths from the ultraviolet into the near infrared wavelength range. Light from the source is collimated and directed along the measurement path to a retroreflector. The light is then reflected back and collected for analysis by a spectrometer. An example setup is show in Figure 1. The characteristics of the light source significantly impact the performance of the system in terms of detection limits and speed (temporal resolution).

Energetiq’s Laser-Driven Light Source (LDLSⓇ) uses a laser to excite and sustain a 100 µm – 300 µm diameter xenon plasma. The result is an extremely bright, broadband radiation emitter, covering the wavelength range from 170 nm – 2500 nm. In traditional plasma sources, such as xenon short arc lamps, the brightness, spatial stability, and lifetime are limited due to the use of electrodes to sustain the plasma. The emitting plasma in an LDLS is approximately ten times smaller than the illuminating plasma in a typical 75W xenon short arc lamp.[1] The very-small plasma produces high spectral radiance and exhibits a high level of spatial stability. The combination of high radiance and spatial stability allows light to be efficiently coupled into small apertures and small-diameter fibers. The small plasma also approximates a point source, enabling collimation with a low divergence angle, which is important for applications with long optical path lengths. 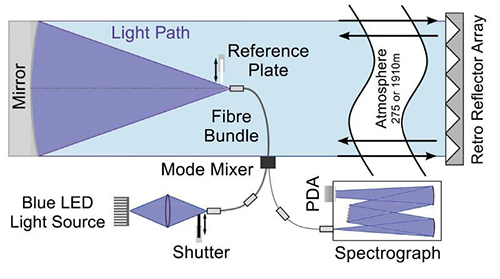 Researchers from the University of Heidelberg utilized a Laser-Driven Light Source in their LP-DOAS setup, shown in Figure 1, to measure many gas species in the atmosphere simultaneously. The high radiance of the LDLS allowed them to couple light efficiently into small core diameter fibers, enabling researchers to experiment with optical designs that are not practical with traditional xenon short arc lamps or LEDs. Once the optical setup was optimized, the researchers recognized that the combination of high radiance and spatial stability of the LDLS resulted in lower noise and higher accuracy, as observed through lower measurement residuals (lower RMS error compared to expected values).[1] They also found that the LDLS resulted in higher overall light throughput, which enabled shorter measurement times, and therefore, resulted in higher temporal resolution.[1]

Scientists in Shanghai, China, installed an LP-DOAS system to measure nitrogen dioxide (NO2) concentrations. Their optical setup included an LDLS and a path length of 2.6 km. Several LDLS advantages were noted, including high brightness, complete wavelength range, excellent short and long-term stability, and long life. Since the optical path spanned a long distance across an urban area, stray light effects due to streetlamps, passing vehicles, and other sources in the environment were of concern. Because the high radiance of the LDLS resulted in higher-intensity light throughput, they were able to achieve higher signal-to-noise ratios, despite the presence of stray light sources.[2]