In addition to the term “étendue,” other terms often used are “f-number” (F/#) and “numerical aperture” (NA). Etendue and its relationship to F/# and NA of an optical system will be discussed, in addition to discussions on how to use étendue and throughput calculations to select appropriate LDLS applications. For simplicity, diffraction and coherence effects are excluded in these discussions.

The term étendue comes from the French word for extent or spread. Other terms used for this property are Geometrical Extent (G), Optical Extent, and Optical Invariant. We will use G to represent étendue. For a LDLS source with relatively small cone of radiation (so paraxial optical approximation is valid), the étendue (G) of a light source is equal to the source emitting area (S) times the solid angle (Ω) from which the light is collected for a specific application, G ≈ SΩ [mm2-sr].

Etendue (G) describes the ability of a source to emit light or the ability of an optical system to accept light. For a monochromator, its étendue of accepting light is a function of the entrance slit area (S) times the solid angle (Ω) from which light is accepted. The étendue is a limiting factor for the throughput of the monochromator. A monochromator with smaller S and Ω will have smaller étendue.

A typical optical system includes a light source, light collecting and focusing optics, a monochromator, light delivery optics and a detector. Within every optical system there is one component that has the lowest étendue (Glim) which sets the limit of the entire system, and has the biggest impact to the performance of the entire optical system. Frequently, Glim is determined by the input slit dimensions and F/# of a monochromator, or the small diameter and numerical aperture (NA) of an optical fiber. Light coming from a larger étendue component will be partially accepted by the limiting component with the lowest étendue.

Due to its extremely small emitting area (~100μm in diameter), the LDLS radiation source from Energetiq has a very small étendue at a given light collection solid angle. The LDLS emits significantly higher radiation power per unit source area and per unit solid angle of emission. Such sources exhibit higher “radiance” (often called “brightness”) which is measured in units of mW/mm2-sr.

If an optical system has a much smaller étendue than that of a light source, a very small percentage of light coming out of the source will be coupled, no matter what optics are used to collect and focus the light.

As shown in Figure 1, the light gathering power of an optical element is characterized by Numerical Aperture (NA), and it is expressed by:

where n is the refractive index (n = 1 in air), θ is the half acceptance angle of the cone of radiation.

F-number is defined by:

Figure 1. A lens pair collecting and focusing light from a source of certain emitting area, S

In fiber optics and microscopy applications, NA is used to describe light gathering capability. The larger the NA, the higher radiant flux is collected. For small angles the relation between NA and F/# is approximately:

Sample Calculations of Etendue of Sources

In Table 1, étendue is calculated for the EQ-99 and EQ-1500 sources. Etendue of the source depends on the NA (or F/#) of the collection. Sample data are calculated for F/# from 1 to 12. For the étendue of the LDLS EQ-99, the emitting area used in calculations is a 100μm diameter disk, which represents a FWHM (full-width-half-maximum) diameter of a typical Xe plasma in an EQ-99 system. For the étendue of the LDLS EQ-1500, a 150μm diameter emitting area is used in the calculation. 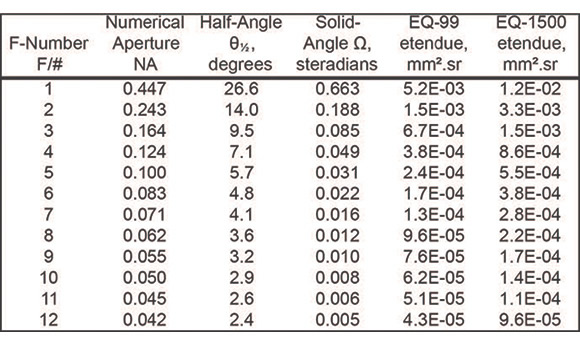 Sample Calculations of Etendue of Monochromator Slits and Optical Fibers

To understand the amount of light that will be coupled through an optical system, the radiant flux can be calculated. Radiant flux (Φ) is the radiation power (energy/time, W, or mW) into, for example, a fiber end or an entrance slit of a monochromator. Spectral radiant flux (Φλ) is the radiation power per unit wavelength [mW/nm]. They can be calculated as the product of radiance (R), or spectral radiance (Rλ) with the limiting étendue (Glim):

Because the étendue, and spectral radiance must be conserved between object and image, assuming no other losses, the above terms are all we need to determine the theoretical throughput - spectral radiant flux.

When making the calculation above, the étendue value to be used is the smaller of the source étendue or the optical system étendue, i.e. the limiting étendue (Glim).

As an illustration, Tables 2 and 3 show the Spectral Radiant Flux into fibers of different diameters using 4 different light sources. We show the results at two wavelengths, 200nm and 300nm. The spectral radiance for the calculations is taken from Figure 2. As a result of this kind of analysis, it becomes clear which light source delivers the optimum spectral radiant flux (power/nm) for each application. 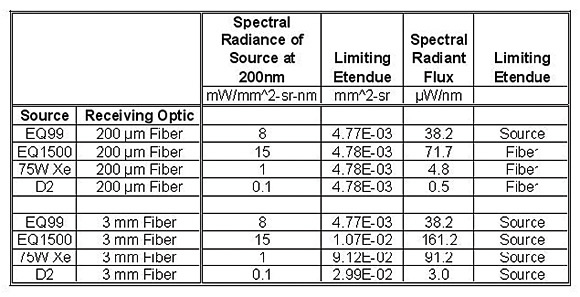 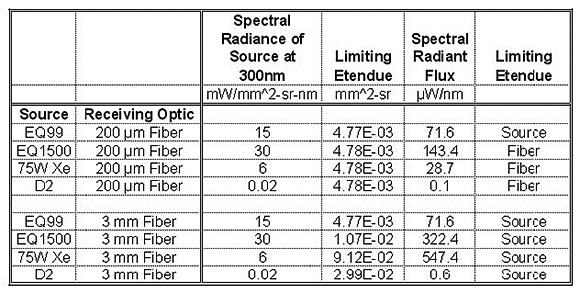