An ultrawideband laser-driven light source has the long life and high spatial and spectral stability needed to fulfill demanding requirements in the sciences.

Today’s cutting-edge research and manufacturing applications in the life sciences and materials sciences need light sources capable of delivering bright and highly stable light over long lifetimes. A new light-source technology has been developed that can deliver ultrahigh brightness over a broad wavelength band (170–2100 nm) for spectroscopy and other uses, making it a cost-effective, longer-lifetime alternative to conventional deuterium lamps (D2), tungsten-halogen (TH) lamps, and short-arc xenon (Xe) lamps. This new light source, developed by Energetiq Technology and called the laser-driven light source (LDLS), has a much longer lifetime—typically ten times that of traditional lamps—and is more stable than its conventional counterparts, due to the elimination of interactions between a high-temperature plasma and tungsten electrodes.

Conventional light sources Many of today’s spectroscopic and other analytical instruments require high-brightness, broadband light sources to make spectral measurements that help determine the composition or structure of samples under study. Traditional light sources do not cover the complete spectral range of interest, which is typically from the deep-ultraviolet (UV), through the visible, and into the near-infrared (NIR; about 170– 1100 nm). For example, an analytical instrument will typically use a combination of a shine-through D2 lamp with a TH or a Xe lamp for broadband applications. The use of multiple lamps in one instrument causes complexity in the optical design, leads to inefficient use of the light, and adds extra cost. In addition, the lifetime of those lamps is typically 500–2000 h, requiring frequent lamp replacement and instrument recalibration.

In the deep-UV wavelengths, traditional lamps have low brightness (radiance), which puts additional constraints on instrument capabilities. Instruments using multiple lamps must deal with such issues as mismatched lamp spectra, low throughput or sensitivity due to the low brightness, and spectrum changes as individual lamps age differently. In many cases, the complexity and cost drive the system designer to use only one lamp, typically a D2 or Xe lamp alone, limiting the instrument in its spectral response and its flexibility in applications.

Deuterium lamps with fused-silica windows are UV-emission lamps with a useful wavelength range from 180–380 nm. The emissions are low at wavelengths longer than 380 nm, so a TH or a Xe lamp may be used to provide visible and NIR radiation. 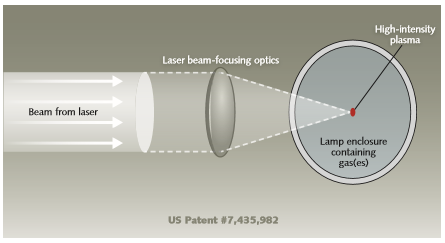 Figure 1.Light emitted by an LDLS arises from the interaction of a focused laser beam with xenon or a mixture of inert gases

A disadvantage for D2 lamps is low UV spectral radiance, even at 200 nm, due to the low pressure discharge and low power density in the plasma. The plasma size is relatively large—typically 0.5–1 mm in diameter—so it is difficult to use in a small-étendue application, such as focusing into a 200-μm-diameter optical fiber or onto the narrow slits of a high-resolution spectrometer. The peak spectral radiance for D2 lamps with fused-silica windows is near 200 nm, and its values are usually less than 0.1 mW/mm2-nm-sr. This radiance decreases continuously over the typical 2000 h lamp life.

Tungsten-halogen lamps are typically used in the spectral range from 400 nm to the NIR. Brightness for TH lamps is relatively low, especially near 400 nm, because of the limited working temperature and large (millimeter-scale) size of their tungsten filaments. For broadband applications, a TH lamp is usually used in combination with a shine-through D2 lamp. The disadvantages for the combination light sources are a low output around the 400 nm wavelength region where both lamps have lower emissions; inefficient optical collection, due to the facts that the lamp emitters are not at the same spot in space and are both low in brightness; and any deterioration or change in one of the two lamps will alter the output spectrum and force a recalibration.

Xenon short-arc lamps have a broad spectral range from NIR down to 250 nm. The spectral radiance (brightness) falls rapidly below 300 nm, due to limitations in plasma temperature that can be achieved in tungsten-electrode lamps. Peak spectral radiance of Xe arc lamps is usually near 500 nm, and can be as high as 1 mW/mm2-nm-sr. Generally, Xe lamps are significantly less stable than D2 and TH lamps. The arc plasma in a Xe lamp is inherently unstable due to spatial movement of the arc spot on the cathode surface as the lamp ages and the cathode erodes. This chaotic movement or flickering worsens with age, making such lamps unacceptable for many low-noise spectroscopy applications. The lifetime of a short-arc Xe lamp is typically 1000 h, which necessitates multiple replacements over the lifetime of an instrument.

An ideal light source for analytical instruments would provide a flat spectral output from the deep-UV to the IR; a very small, ultrahighbrightness emitter; and a constant output over years of operation.

In an LDLS, a highintensity plasma consisting of Xe or other inert-gas mixtures is sustained by absorbing energy from a focused laser beam from a diode or fiber laser (see Fig. 1). This plasma can be called an optical-discharge plasma (ODP), as opposed to the electric-discharge plasma in shortarc Xe lamps with electrodes. The ODP plasma in an LDLS is formed at the focusing spot of the laser beam in the center of a fused-silica bulb filled with high-pressure gases. The power density of the laser beam at the focusing spot is sufficiently high to cause a small, intense plasma with temperatures in the 10,000–20,000 K range, significantly higher than the 5000–7000 K typically achieved in a short-arc Xe lamp. Such high plasma temperatures enable deepUV emission to be greatly increased.

The size of the plasma is defined mainly by the focal spot of the laser, and the full-width half-maximum (FWHM) size is about 100 μm in diameter. Spatial and temporal stability of the plasma is constrained primarily by the stability of the optical system and the laser drive power, both of which can be maintained to high precision. Because there are no electrodes in contact with the plasma to cause energy loss, almost all the laser power absorbed by the plasma is reradiated across the broadband spectrum. The scalability of this technology has been demonstrated over a wide range of laser input powers from 20 W to 5 kW.

Analytical instruments require sources with high brightness in order to achieve high throughput and high signal-to-noise ratio (SNR). With a high-brightness, small-size light source, the emitting area of the source can be efficiently imaged, with matching étendue, onto a small-diameter optical fiber or a narrow monochromator entrance slit. A higher-brightness light source enables greater sensitivity and higher resolution.

A single light source that delivers the wavelength range from deep-UV to NIR reduces design complexity and increases the operating range of an analytical instrument. Light at different wavelengths being emitted from the same emitting volume allows simpler and more efficient coupling of the light to an optical system. In the LDLS, the input power is deposited into a small volume, making the energy density significantly higher than that of a Xe arc-lamp plasma. This higher energy density produces a higher-temperature Xe plasma with consequently higher emission across the UV/visible/NIR spectrum, with the largest increase in the deep-UV. 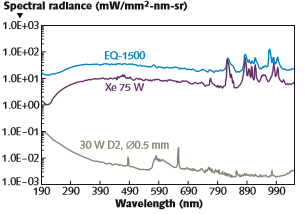 Frequent lamp changes and calibrations will lower productivity by consuming valuable technical and financial resources. In electrode-driven lamps, the hot electrodes themselves are the primary failure mechanism, as they evaporate metal onto the quartz bulb. In an LDLS, the energy is delivered to the Xe plasma optically, so there is no high thermal, electrical, or mechanical stress on the high-pressure gas bulb. The bulb’s electrodes, used for ignition only, are spaced away from the plasma and not directly heated by the plasma during operation. A comparison of lifetest data highlights the differences in output drop over time between LDLSs and typical Xe and D2 lamps (see table).

For a high-brightness, small-spot light source, spatial stability is critical in permitting efficient coupling to small étendue applications. Any motion of the plasma, as seen in the flicker of Xe arc lamps, translates to signal noise. In the LDLS, precise control of the laser focus combined with regulation of the laser power demonstrates spatial stability of less than ±1 µm (see Fig. 3).

The LDLS is now being used in applications as diverse as UV/visible/ NIR spectroscopy, optical-fiber testing, semiconductor metrology, advanced endoscopy, and photoemission-electron microscopy. This source enables a new generation of analytical instruments with a combination of higher sensitivity, greater throughput, and longer maintenance intervals. 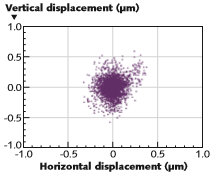